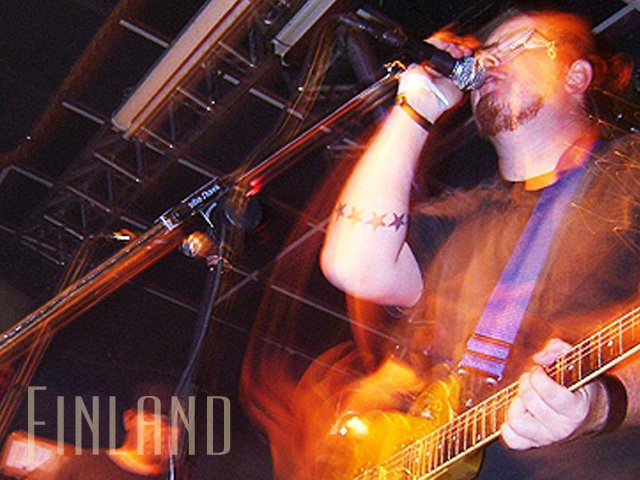 Finland formed back in 2006 as a solo project of Central Florida favorites Thinking of Amy and Norther Winslow’s frontman Josh Fleenor. Playing a few months around town, armed with an acoustic guitar and a Casio keyboard, Josh began to build a fan base singing quiet, heartfelt songs about life and love, and his battle with both. Josh soon added two members from Thinking of Amy and Norther Winslow to fill out the sound scape. In stepped Dave Albani who would played guitar as well as keys, and drums. Lev filled in to play bass, bells and drums as well, which at the time only consisted of a snare, and cymbal. The three began playing around Florida, and soon joined a local label called Team Grizzly Records. From that signing came Finland’s first release, Awake Arise the Great Untouchable in 2007. After playing a number of shows as a 3 piece to support that release, the guys decided they needed a full time drummer, at which point Adam Winn joined the band.
Once Finland became a 4 piece, the writing took a complete 180. The band began to steer away from the airy soft sound that Josh had been crafting, into something more aggressive, while still maintaining it’s “pretty” side as well. The guys went back into the studio to record “The Differnce Between Us” EP, this time self-released as Team Grizzly was no longer active. After playing shows consistently for another year, Adam left the band to focus himself full-time to the now hugely popular Le Blorr. For about another 8 months, Finland wasn’t playing any shows, however Josh, Dave and Lev continued to write, while they searched for a drummer. In stepped Josh’s long time friend Joey Martin. With an arsenal of new songs the band began playing shows almost immediately.

With now an even more aggresive sound, Finland had become a full fledged indie rock band. Finland played about a year until Lev left for Colorado. Scott Rockwell (The Influence) stepped in at bass, and the boys kept rolling. Finland headed back into the studio and recorded thier 3rd record, Different Weather. With the record almost finished, the band played a handfull of shows before finally calling it quits in December of 2011. Differnt Weather was never released.

For almost 6 years Finland trekked around Florida with a revolving door of members, and were priveleged enough to share the stage with bands like, The Helio Sequence, Look Mexico, The Woods, Le Blorr, Clock Hand Stangle, Jason Choi and the Sea, and many more.